History of the CNF

The Cornell NanoScale Science & Technology Facility (CNF) had its beginnings within the National Science Foundation (NSF) during the mid-1970s. During 1976 NSF held three workshops across the country to assess the need and requirements for a university-based national research and resource facility for submicron structures (NRRFSS). As a result NSF issued a request for proposals. The winning proposal from Cornell University was promoted and coordinated by Prof. Joseph M. Ballantyne, School of Electrical and Computer Engineering. There were four other site visit finalists that included several leading universities.

To facilitate the creation of the NRRFSS in 1977, Cornell appointed Prof. Ballantyne as Acting Director, assembled a Program Committee to advise him on equipment and program issues, and rallied faculty to respond to the five-year $5-million grant that provided for $2 million dollars in equipment purchases, and $750 thousand dollars per year for four years of program support. The initial Program Committee was chaired by Prof. Paul McIsaac and its members were selected from both academia and industry: Profs. W.S.C. Chang (Washington University) and T.H. Henderson (University of Cincinnati), Drs. A.N. Broers (IBM Yorktown), R.F.W. Pease (Bell Labs), and E.D. Wolf (Hughes Research Labs). Drs. E.R. Chenette and later, J. Harris, were the NSF representatives and Profs. J.M. Ballantyne, B.W. Batterman, G.C. Dalman, L.F. Eastman, C.A. Lee, A.L. Ruoff, and B.M. Siegel were the Cornell representatives on the committee. A Policy Board was also created to give long range guidance to the facility. Its members at the end of the first year were Prof. T.E. Everhart (UC-Berkeley and later Dean of Engineering at Cornell) and Drs. G. Moore (Intel), K. Patel (Bell Labs), and H. Caswell (IBM).

Dr. Edward D. Wolf became a candidate for the NRRFSS directorship and joined Cornell in July 1978. 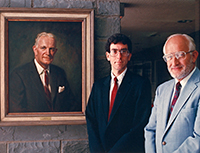 During the first several years, my focus as director was on securing an adequate full-time technical staff to operate and repair more effectively the growing capital equipment investment (the 2016 replacement price is about $ 45 million) and to design and build a clean room facility that would be durable and adequate to the tasks before us. So we changed from individual faculty to staff responsibility for equipment operation and repair, and from a renovated 4th-floor space in Phillips Hall to a new site on ground level for the new lab. Necessarily, the price tag for both NSF and Cornell went up dramatically. We built a $4.2 million dollar facility with a 7,500 square foot clean room, which we moved into during the fall of 1981. The new lab allowed local Class 10 processing in a Class 500 ambient with very low electromagnetic fields and mechanical vibration, and its construction was endowed by Lester B. Knight (Cornell '29). By our fifth year we had garnered about a $1.5 million dollar annual core budget from NSF, which has remained nearly constant to the present. We also had excellent financial support and encouragement from Cornell administration, namely Deans of Engineering Edmund Cranch and Thomas E. Everhart, Provost W. Keith Kennedy, and President Frank H.T. Rhodes. This successful period of growth and transition was possible only through the unfailing interest and support of a core group of Cornell faculty from ECE, applied and engineering physics, and materials science and engineering. In addition, Prof. Ballantyne created the industrial affiliates program called the Program on Submicron Structures or PROSUS during the second year of the grant, which would grow to a peak membership several years later of 44 member companies and provide nearly $400 thousand dollars of annual support to the operating budget, which averaged about $4 million dollars during the mid to late 1980s.

Over the next fifteen years (1982-1997), the operation of the facility remained at a nearly steady state with about twenty full-time staff members servicing as many projects as was humanly possible (202 in 1997). Directors come and go, but the long term success of the facility is primarily the result of a talented and persevering staff that often works well into the night during the short visits by researchers from other institutions. CNF staff members must astutely bridge the gap between wishful thinking by users and what is possible. They are, or become, the resident expert in their particular area of nanofabrication. The user generally leaves satisfied and impressed, and the facility advances in its capability with a greater appreciation of the wide range of user needs.

During this period the facility also evolved at Cornell from a College of Engineering facility to a University facility (1987), and in name from the National Research and Resource Facility for Submicron Structures to the National Nanofabrication Facility (1987). Prof. Harold Craighead, School of Applied and Engineering Physics (recruited from Bellcore) became the second director of the facility in 1988. Harold became the first Lester B. Knight director, as a consequence of the Knight family endowment of the directorship during his tenure. Prof. Noel C. MacDonald, School of Electrical and Computer Engineering, served as the third director of the facility from 1995 to 1997 when he left to assume a position at DARPA. Prof. Joseph M. Ballantyne served as the interim Lester B. Knight Director of CNF from 1997 to 1998, when Dr. Sandip Tiwari (1999-2006) accepted the directorship, recruited from IBM. 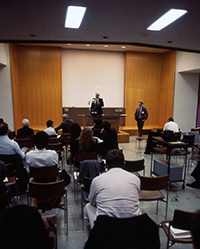 While many faculty, associate directors, and staff deserve mentioning by name, I will only mention four. Prof. Robert Buhrman (CU Ph.D.) was the Associate Director for User Programs from 1980 to 1983 during a most critical time for the facility as we sought to strengthen our User Program. Gregory Galvin (CU Ph.D.) served as associate director from 1984 to 1989 and was an outstanding administrator prior to, during, and after my sabbatical leave at Cambridge University in 1986-87. He led and contributed significantly to all aspects of the facility's growth and operation. Dr. Alton Clark (CU Ph.D.), a physicist and former VP at Carborundum Corporation, has been a key administrator in his positions as associate director and as Interim director helping the facility transition through three directorships. The facility has benefited from his superbly organized and efficient leadership. Dr. Lynn Rathbun (CU Ph.D.) has become the 'senior' facility staff member and has contributed greatly to the formation of the NNUN (see later), to other critical proposals, and to the documentation of CNF accomplishments over the years. 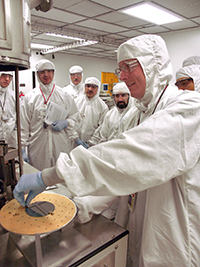 In 1993, NSF enlarged the funding and number of nanofabrication facilities. Cornell University won the competition for the National Nanofabrication Users Network (NNUN) with the Cornell Nanofabrication Facility a key facility among five laboratories; Cornell, Stanford University, University of California, Santa Barbara (UCSB), The Pennsylvania State University (PSU), and Howard University. In 1998, the NNUN was notified of another five years of funding. It is only fitting that Prof. Ballantyne, who was key in winning the original 1977 competition for the facility, was at the helm as director when CNF was awarded this funding. During the ten years as part of NNUN, the CNF user base grew dramatically. NNUN served as a model for national funding of facility networks, and set the stage for an even larger nanotechnology network.

During that period, Prof. Tiwari became director of the entire network, and in 2006, Prof. John Silcox came on board as interim director until Prof. George Malliaras (2007-2009) took on the role of CNF director. In addition, Don Tennant was hired as CNF's director of operations. Lynn Rathbun continued his important role in CNF.

Following Malliaras' departure for leadership of the new Center for Bioelectronics at the College des Mines in Gardanne, France, a new Director, Prof. Dan Ralph (2009-2016) was selected. Overall leadership for the network shifted to Stanford and a new proposal was prepared for renewal of NNIN. Unexpectedly, NSF cancelled the competition, extended the NNIN for one additional year of funding and then held a workshop to plan a new direction for the network. 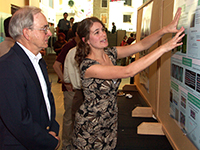 In July 2016, the CNF welcomed our new Lester B. Knight Director -- Professor Christopher Ober. Professor Ober states, "As the new CNF Director, I am excited about the new job and about the new opportunities afforded by the creation of the NNCI, a network focused on nanoscience and nanotechnology. As the users of CNF know, we have first-rate facilities and outstanding staff who are dedicated to helping our users achieve success in all their efforts. As a long time user of CNF myself, I am always very impressed with the enthusiasm of the staff for teaching new users and working with them to solve interesting and often difficult problems. We welcome inquiries from all researchers about CNF's capabilities and the new network." 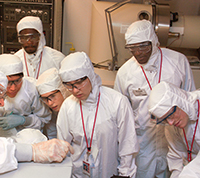 Today, CNF serves well over 600 regular users in a year across a broad range of subject areas. With projects from more than 100 Cornell faculty members and a similar number from other academic institutions, and a diverse user membership including nearly 400 graduate students (80% whom are from Cornell) and around 150 industrial users, the impact of CNF can be felt across the country's research landscape. It is noteworthy that CNF continues to provide uniquely enabling technology for a wide spectrum of science and engineering research at a university, founded by Ezra Cornell, under the motto,

"I would found an institution where any person can find instruction in any study."
- Ezra Cornell