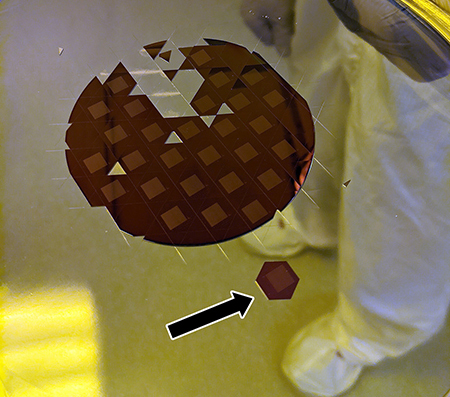 On Saturday, Major James Mathews of Civil Air Patrol (CAP) drove more than 300 miles to deliver a special microchip to space robotics company Astrobotic. This microchip, carrying 27,285 names, messages, and images, is set to be carried to the Moon later this year aboard Astrobotic’s Peregrine lunar lander.

The US Air Force Auxiliary, CAP partnered with the Cornell NanoScale Science and Technology Facility to etch more than 27,000 CAP member names, 270 Air Force Association (AFA) StellarXplorers names, an 80th anniversary CAP logo, and messages from CAP and AFA leadership onto a microchip the size of a postage stamp. To achieve this, Cornell’s lab employed deep ultraviolet (DUV) lithography, along with other nanofabrication processes, to create the 0.5” hexagonal chip.

“Among these names are more than 4,000 CAP high school cadets,” says Lt. Paul Douglas, Burke Composite Squadron’s Aerospace Education officer. "My personal hope is that our young cadets will stand in their back yards, look up at the Moon, and dream big. They’ll know if they can make it to the Moon, they can do anything.”

“Working together, we can inspire and make changes for the good. Together, we can improve our nation, our planet, and even our universe,” says Major General Mark Smith, National Commander and CEO of CAP.

With the first of many milestones completed, CAP will continue to work with Astrobotic to track the progress of the microchip. Astrobotic will place the chip inside a “MoonPod” and securely integrate it with their Peregrine lunar lander.

“It is an honor to have so many Civil Air Patrol and cadet names aboard Astrobotic’s Peregrine Mission One,” says Sharad Bhaskaran, Astrobotic Mission Director. “Their Aerospace Education program directly aligns with our mission as a company to make space accessible to the world and inspire the general public through space.”

Astrobotic’s Peregrine lander is poised to be the first American spacecraft to land on the Moon since the Apollo program around 50 years ago. Peregrine will fly aboard ULA’s new Vulcan Centaur rocket later this year carrying CAP’s microchip and a diverse suite of other payloads from seven different countries, dozens of science teams, and hundreds of individuals.

Astrobotic is the Moon company and beyond. We develop advanced navigation, operation, and computing systems for spacecraft, and our fleet of lunar landers and rovers deliver payloads to the Moon for companies, governments, universities, non-profits, and individuals. To date, we have two fully funded lunar lander missions on the books, more than 50 prior and ongoing NASA and commercial technology contracts and a corporate sponsorship with DHL. Astrobotic was founded in 2007 and is headquartered in Pittsburgh, PA.

For Patriots ages 12 and up, Civil Air Patrol is a vital force that protects Americans in need by responding to disaster and preserves our country’s values by developing young leaders and ensuring our country's preeminence in Aerospace and Cyberspace Education. Nationally, it is estimated that Civil Air Patrol volunteer hours are valued at over $167 million as we perform missions for America.

The CNF technical staff worked with CAP to design the chip, starting with a computer-aided design (CAD) through using their photolithography, etching, and dicing tools to lay down an 80-nanometer thin film of silicon nitride on a standard silicon wafer. Details of the process — from start to finished chip, 0.5" across the hexagon, flat edge to flat edge — can be found below in the Image Gallery. The CNF is a member of the National Nanotechnology Coordinated Infrastructure (NNCI) supported by National Science Foundation Grant NNCI-2025233. 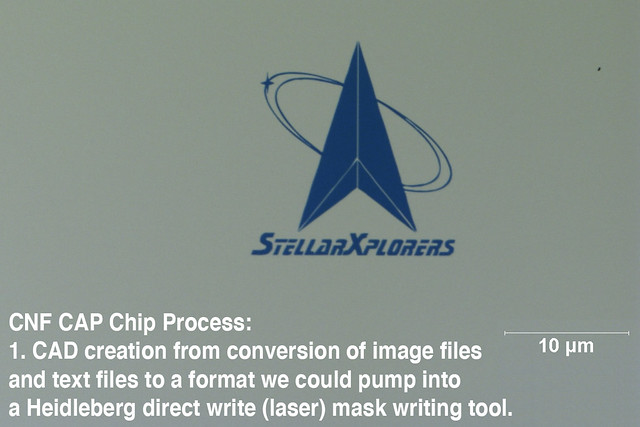