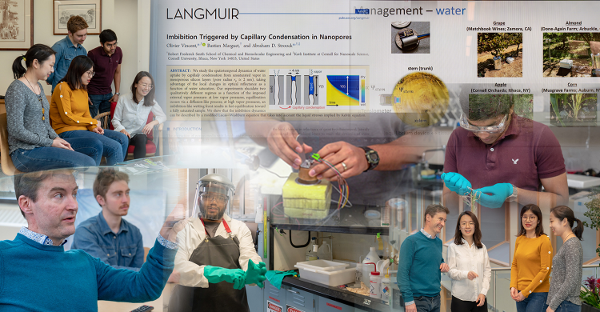 Commenting on Cornell’s Digital Agriculture Initiative, “It’s a very exciting time to start conversations with plant biologists who never thought they’d ever be talking to an engineer like me.”

“Plants have a pulse,” says Abraham Duncan Stroock, Chemical and Biomolecular Engineering. “It’s the tug-of-war that goes on between the plant’s leaves and the water in the soil. A leaf loses hundreds of water molecules for each molecule of CO2 it captures during photosynthesis, so it has to rehydrate. The liquid in the leaf is at a negative pressure, and it pulls water up the plant, out of the roots, and out of the soil. Plants have evolved this beautiful design for moving liquids by very large tension, which is something that engineers never do. We always push liquids, but plants pull.”

Stroock has spent much of his career studying microfluidics, wet chemical processes on small scales. About a decade ago, he became intrigued by plant microvasculature, the webs of capillaries that move liquid around inside tissue. Plants have two systems: the xylem, which brings water up to the leaves, and the phloem, which carries photosynthetic products down from the leaves to the rest of the plant’s tissues. Important questions remain about how these systems work.

The Microtensiometer, a Device That Mimics a Plant’s Capillary System

Focusing on the xylem, the Stroock group used the Cornell NanoScale Science and Technology Facility to fabricate a device that mimicked plant microvasculature. “We take the approach that if we can build something, we can understand something about it,” Stroock says. “In this case, we built a very simple mimic of some the basic physiological characteristics of plant microvasculature, and we were able to move liquid around in the way plants are believed to do.”

Soon after that early breakthrough, the Stroock group began working closely with Alan N. Lakso, Horticulture (now emeritus), who is an expert on grape and apple physiology and cultivation. “We started to pursue a parallel path with this device,” Stroock says. “Partly we wanted to use it in the lab, which we still do, to study this state of liquids under tension. But we also wanted to develop a version we could place directly inside a plant, to fuse with the plant’s tissue, where it would monitor the plant’s pulse and communicate to us about the plant’s ability to manage its water needs.”

The researchers were successful in creating a tiny microtensiometer which senses the plant’s pulse, or drought stress. “It’s a translator,” Stroock explains. “It feels stress the way a plant does and then turns that into a voltage that we can read easily.” Over the last few years, Stroock and his collaborators have been testing the device by embedding it in apple trees, almond trees, grape vines, and other crops. “It feeds us data that we send to the web,” he says. “We’re getting beautiful, unprecedented dynamics out of the test plants. It works well enough as a scientific tool that we think it can now become a technology to serve irrigation management.”

In 2014 Stroock, Lakso, and Michael Santiago, PhD’16 Chemical and Biomolecular Engineering, attended a pre-seed workshop at the Kevin M. McGovern Family Center for Venture Development in the Life Sciences to explore the potential for commercialization of the microtensiometer. The possibilities looked good, so the team founded a company called FloraPulse, with Santiago as the chief executive officer. Now based in Davis, California, FloraPulse has licensed the microtensiometer patents from Cornell and is working with almond and grape growers in California—along with Stroock, Lakso, and Lialiang Cheng, Horticulture, working on apple trees—to explore the full potential of the technology.

“The market needs to be matured,” Stroock says. “There’s a question about what we should sell. Is it a hardware or a service? My lab, Alan Lakso, and other colleagues from the School of Integrative Plant Science (SIPS) and the Collage of Agriculture and Life Sciences (CALS) are doing further research.

Stroock explains, “We’re asking, what can we learn from a plant and its soil and local microenvironment by doing year-long measurements in the field? How do we understand the whole population of trees when we only have detailed sampling of a few of them? How do we bring together this detailed sensing with available remote sensing data to provide something that is interpolated across all plants in the orchard? The answers to these types of questions will help us discover the limits of the added value we can give to a grower.”

AquaDust, a Nanoparticle that Can Convey a Plant’s Water Stress

The FloraPulse device is just one of many research projects Stroock is working on. Continuing his investigations around plants, he joined with Michael A. Gore, Plant Breeding and Genetics, to develop a different technology that can communicate a plant’s response to water stress. In this case, the Stroock group created a nanoparticle, a type of hydrogel they call AquaDust, that can be embedded in the leaf of a plant. The nanoparticle changes the fluorescence spectrum of the leaf depending on how much water stress the leaf is undergoing. When viewed with a multispectral camera, the leaf will appear to glow in differing degrees of red, green, or blue.

“To create the AquaDust particle, Mike gave me a sense of the constraints he’s working under as a plant breeder,” Stroock says. “He has to take thousands of measurements of hundreds of plants in a field on a daily basis to find the genes associated with water stress. We came up with this distinct strategy we think is generalizable, whereby you make the plant turn into a sensor of itself. When you fly a drone with a camera over the field, you could potentially collect the whole field’s data in half an hour.”

The researchers manually inoculate each leaf with AquaDust by squeezing it through the leaf’s stomates, minute pores that allow the movement of gasses in and out of intercellular spaces. “The goal is ultimately to just spray it over the field and have the leaves take it up,” says Stroock. “Our next step will be to include a collaboration with a company that has the industrial expertise for formulating a spray like that.”

Stroock has taken his love of collaboration to a new level as the associate director and one of the founding members of the Cornell Initiative for Digital Agriculture. The initiative is a collaboration of researchers from SIPS, CALS, Computing and Information Science, the Colleges of Engineering, Business, and Veterinary Medicine.

“This initiative is an enormous opportunity with lots of grassroots enthusiasm that’s been matched by top-down support from the deans and provosts,” says Stroock. “It’s the beginning of a new phase of bioengineering in agriculture where I think Cornell can be a world leader. It’s a very exciting time to start conversations with plant biologists who never thought they’d ever be talking to an engineer like me.”

Reproduced from the Cornell Chronicle Article