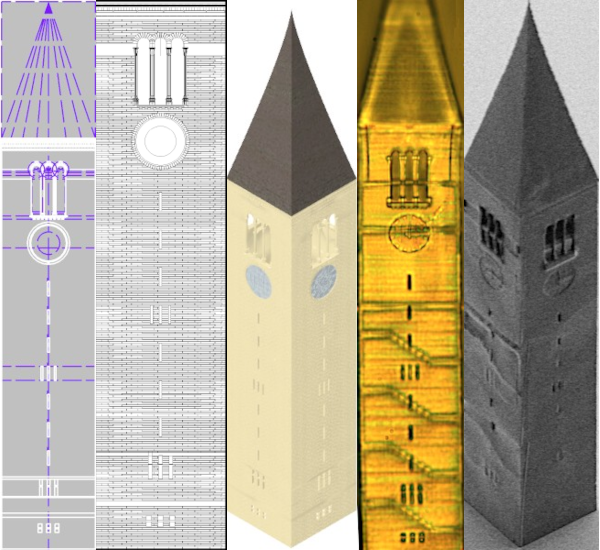 picture: Using cutting-edge Nano 3d additive technology, we set out to display Cornell’s best known symbol the best way we could. We made it small, very small. Using the NanoScribe GT2’s capabilities for possibly the world’s smallest bell tower. The original design was printed to be 1 mm tall. The Second itirration printed a 200um tall and the most current has a 200um with pumpking on top

Like the smallest guitar created by Dustin Carr and Harold Craighead in 1997 at the Cornell NanoScale Science & Technology Facility (CNF) — Edward Camacho, CNF technical staff, has created what we believe to be the smallest rendition of the iconic McGraw Clock Tower. Just one millimeter tall! This tiny feat was accomplished using one of CNF’s newest tools — the NanoScribe GT2 Laser Lithography System.

The NanoScribe GT2 Laser Lithography System is a state of the art two-photon polymerization volumetric maskless three-dimensional printer. It is one of the most recent acquisitions at the Cornell NanoScale Science and Technology Facility (CNF) located in Duffield Hall on Cornell’s main campus. The tool was acquired in late 2019, and delivered and installed in January 2020. This was accomplished with the help of a committee of faculty and researchers, and a grant from the National Science Foundation (Grant NNCI-2025233). 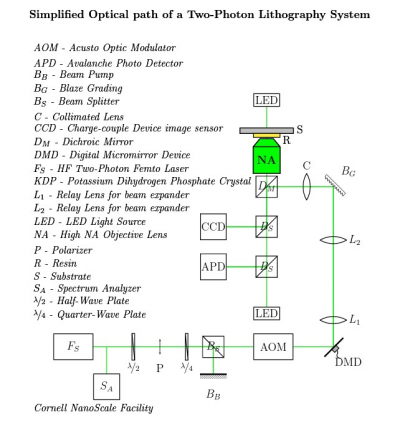 The NanoScribe GT2 can create three-dimensional nanostructures using a near infrared (NIR) femtosecond laser via direct-write onto a photosensitive resin, which is subjected to a non-linear two-photon absorption process. This process involves cross-linking the resin via ultraviolet (UV) absorption. The laser sets a focal light cone where a concentration of the light intensity defines the exposure focal spot volume or a “3D Pixel.” Using this technique, a 3D CAD design can be broken into an X-Y-Z coordinate system to define the structure pixel by pixel and layer by layer.

The sensitive exposure system rests on a finely tuned vibration isolated table and a high-speed ultra-precise piezoelectric stage for movement in X, Y and Z coordinates, and uses a galvanic mirror deflection system for focusing and beam rasterization. Models for printing can be designed using the stand-alone software DeScribe—which comes with the tool —or with any CAD software capable of outputting file formats DXF or STL. The DeScribe software can import these formats. CNF has three solution sets for size scales and applications. Applications of this technology include microfluidics, micromechanics, microarchitecture, biomimetics, biomedical engineering, life science, micro-electro-mechanical systems, micro- optics, photonic metamaterials, and plasmonics. (See Simplified Optical Light Path image )

To demonstrate the advanced capabilities of the NanoScribe GT2, the CNF elected to print a very Cornelian symbol: the McGraw Clock Tower. As the tool manager, Edward Camacho was tasked with this effort. A lot of time was spent researching the history behind the iconic building. The level of detail of this 3D print is incredible, including a complete reconstruction of the tower from the individual external bricks to the internal stairways and bells. 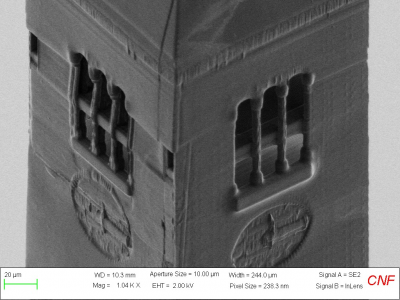 "I did not find a 3D CAD model that stood for the structure in detail, thus I created my own. Pictures from the Cornell online archive and the building's website were used as a reference. My main specifications and assumptions: 173-feet tall (53 meters), 161 steps, 21 bells, identical sides, two different staircases, two floors at the top, a pyramidoid roof, and a Romanesque Revival architecture style. During the first few months of the COVID-19 pandemic, I took this from a conceptual idea to a 3D model of the tower. The model includes all my specifications. Once the model was finished, the STL file was created. The current dimensions of the micro tower are 160 µm wide, 150 µm deep, and 1 mm tall. This is possibly the world’s smallest bell tower.”

As a festive addition to the original model for Halloween I added the iconic pumpkin using a 200um tall model. 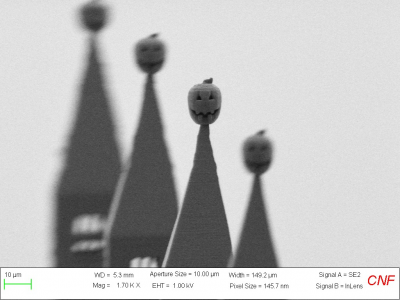 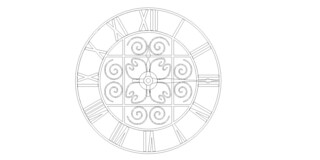 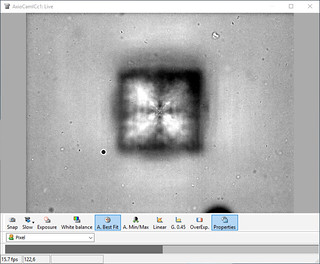 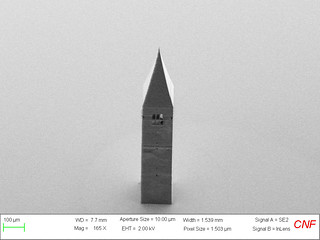